I’ve been discovering such a variety of walks in my neighbourhood, makes for such a fun opportunity to strike out and get some exercise. Plus I keep on meeting some lovely dogs and see such a variety of birds.

I just love walking.  In the rain, in snow, under cloudy skies and on sunny days.   For 30 minutes, an hour, 2 hours .. all day!   And I try to keep up a brisk pace and only stop for short periods of time to watch birds or talk.

However I’ve noticed quite a number of people out in public, seemingly talking away on a hidden earpiece which is connected (I hope!) to some kind of new-fangled cell phone or whatever.   I wonder if people know how weird this looks .. out in public by themselves .. talking away .. looks a little strange.  I always try to steer away from these people.  They reveal so much about their personal lives .. not realizing that we can hear them … ick.

No .. I mean to say that when I’m out walking and stop and talk to doggy parents and their dogs.

Today I decided that I’ll vary my time walking .. so instead of leaving at a specific time for a specific route .. I’ll endeavor to add variety .. which is the spice of life.

Just a quick calculation on walking routes brought up at least 10 choices at least, from our front door. 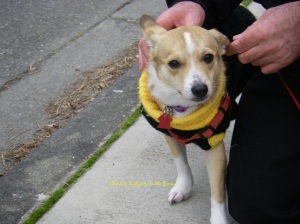 Till finally, I was kneeling on the sidewalk and she had jumped up, put her little paws on my arm and was giving me kisses!  Lovely darling little Miko.

Her new family had adopted her from the local SPCA, about a month ago .. what a wonderful Christmas gift she is.

Cloudy skies yesterday .. so I’ll slip in a photo from a few days ago just for fun. 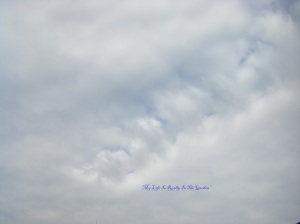 I was so excited about seeing Jupiter on Monday night!  I’d contacted the Dominion Observatory and received the information that on Tuesday, the Moon would then be on the left side of Jupiter .. so I was quite looking forward to seeing that.  Unfortunately, with the overcast skies that didn’t work out.   Here is a NASA site, click on the video to see more about Jupiter and other planets close to the moon in January (how exciting!):

Here s one of my latest greatest gardening gadgets.  I’d always wanted one and it was on sale at Lee Valley!!!   Bonus.  Plus, the instructions are printed on the handle.  How clever is this. 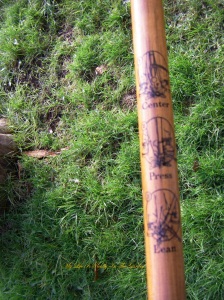 Easy to operate, see how the grippers open up … you place these in the center of the dandelion which is happily growing in the lawn,  and then step on the lever 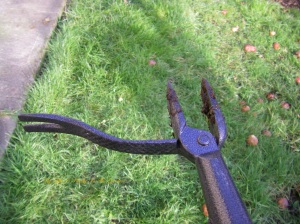 This action causes the grippers to close tightly around the dandelion

And all you do then is to lift the digger from the ground and see … dandelion plus the tap-root .. successfully removed!!   No chemicals needed.  No pouring of vinegar into the soil – which not only kills the weeds, but also upsets the balance of soil life and kills the worms that are so important in chewing through the soil 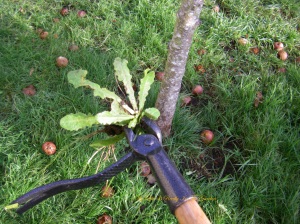 See … complete dandelion removed.  And now . .. you can just lay the whole plant at the side of the garden, to let the plant dry out (and the goodness of the plant will be absorbed by the soil).  Then you can just add the dried plant to the compost pile.  No, it won’t re-grow.  It will break down into the lovely compost.  All natural.

I was also very fortunate on another great gardening tool … a compost turner.  I was going to buy one and lucky to find that there was one in the sale bin, half price.  Oh, happy days.

Robust Robin, tucked away in the tree ..

And later on, found this happy Robin … munching away on the apples that have fallen from the apple tree (wild root-stock, apples are not tasty at all .. but the birds don’t mind).

Ms Downy Woodpecker is nibbling at one of the suet blocks … here she has a blob of suet on her beak … hmmm… I don’t think that she meant this to happen.

And the Anna’s took to their new hummingbird feeders right away.  This is part of a double feeder, which has the option of being used separately also.   Supposedly these feeders deter ants and hornets.  Well .. we shall see.

Some snowdrops growing away .. luckily without the snow.

Oh .. and my garlic crop has been growing away.  I’d tried to deter this by piling on more seaweed and chopped oak leaves .. but yesterday, decided that I can’t fight Mother Nature.  So I carefully lifted away the heavy top layer.  Some greens broke off, but I figure more might grow.  Anyway, just another example of how growth will continue, despite my efforts to deter it.  Thus, a lot of the greens are actually white and spindly, crooked from seeking the sunlight.  No worries.  After a few more days .. they will be strong and green.  Then it will be time for another photo session. 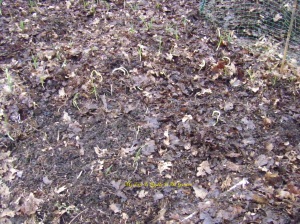 While I was busy doing this work of removing the top composted layer .. I suddenly noticed some loud thumping noises coming from the back fence … in some bay and laurel bushes.  What the hey … it sounded like some animals having a fight but I couldn’t figure out more than that.

Suddenly a form flew out and landed on one of the big sturdy branches of my wild and crazy tree (the wild pear rootstock, now a huge tree).  It was a huge hawk.  Looked to be about 2 feet in height and only about 10 feet away.

I said a few expletives out of surprise and we just stared away at each other  I saw some orange colouring in the tail feathers and was admiring the charcoal and white variegated body feathers.  Then it swiftly and quietly flew away.  I couldn’t see anything in the beak so don’t know if the bird that was attacked got away.  A few minutes later I went over to the bushes, but could only find 2 tiny black and white feathers.  So, while I hoped that the hawk hadn’t caught one of the Downy Woodpeckers,  I couldn’t be sure that he had captured something.

Now this is something that must go on daily in the yard .. but to be actually outside while it was happening ….was pretty darn exciting.  True nature.

Then I spent time sorting out the stones that were caught up in the seaweed that D & I had gathered…. to use in a garden feature.  Tedious work sorting through the piles of seaweed over my soil sifter .. but well worth the effort.  Once I figure out what the garden feature will be like.  No worries though … the ideas will come when I’m working with the soil.  They always do.