The sun was shining brightly yesterday and I spent some timeless time in the garden .. really got a lot done.

Moved more of the Miracle Mulch, placing some as mulch in the side perennial gardens and some around the potted trees.   Almost done.  Plus there are more containers full at the side of the house.  Whew …I’d ordered a lot a few months ago .. moved it all from the driveway to the back … and then just left it all for a while.  The earthworms have already moved in, working away to turn the mulch into beautiful soil.

More time spent gazing upwards at the changing beauty up there ….would ephemeral describe these wispy clouds?  I think so. 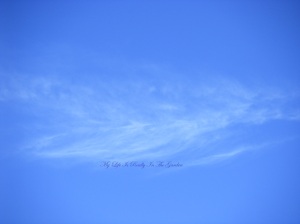 Some temporary garden art!  I removed the ice from the top of a container of water and placed it in front of one of my garden signs.

The birds, all of them, from the European starlings to the Chickadees .. have feasted from this apple and still there are lots left for them to nibble on.

More of that lovely eye candy ..

Containers of strawberries .. I need to plant them in the ground soon before the frost!  Even then, though, I’m not worried.

I’d been standing in the kitchen earlier, looking out the window at the birds visiting the little feeder.  Notice that one little Fox Sparrow had problems with his left eye.  Don’t know whether he’d been attacked or was ill, but his vision was gone in that eye and there was a raised section of pink around the bottom and side of that eye.  Poor little guy.

Once outside, I’d noticed the same little Sparrow still in the feeder.  Guarding the space for himself.  I was glad he found some refuge for awhile. 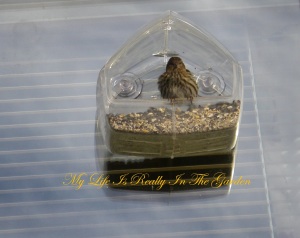 He ate steadily .. keeping his good right eye alert for any intruders.  DH & I watched him for a while.   His feathers were fluffed out and he seemed to be breathing quite heavily, his little chest would puff in and out, like an accordion.  I was sure he was ill and glad he had a place to rest.  Although .. he was back today, glad to see!

After awhile .. he left the feeder and flew up to the roof … perched there for a while.  Looking around.

A few times he would look straight down at me .. I wondered what he was thinking … was he aware that I was supplying the food?

Back in the feeder .. and I don’t think he really noticed this intruder, pecking away at the seed .. he didn’t seem to mind him being there.

As usual . there was a waiting line outside the feeder.

Once again  .. another bird waited, closer ….but when he finally flew towards the feeder .. the little Fox Sparrow quickly spread his left wing out straight to ward him away!  This happened so quickly.  It was definitely a fighting stance.

And it worked … the other bird was deflected and flew away.   I stood for a while and watched as the Sparrow continued this defensive activity.  At times he would fling out both wings, straight out!  The body language was unmistakable. 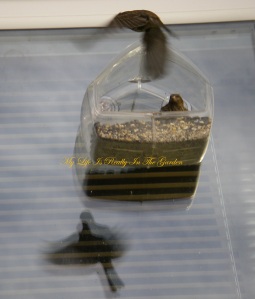 There is still a flat of sage plants (and roses also!) to plant … where does the time go! 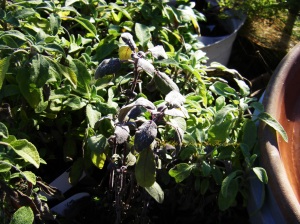 Brrr …. ice still on the surface of the bird’s watering hole (one of those upturned tomato cages with a shallow bowl!) 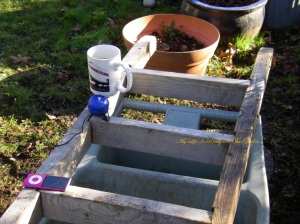 Soaked up all the beautiful skies that I could yesterday .. as the weather reports indicate rain for a few days.   Enjoy.

At the base of the cherry tree, Calendula plants growing everywhere, fresh mulch applied.   Found one of those lovely glass globes that we used to be able to buy at Capital Iron.  I have a few more scattered somewhere .. green .. gold .. amber

Another lovely day .. time spent in the yard … and all that is beautiful around it!

I love dogs and currently do not have any, so I am a dog-mommy when I can be. Gardening is my passion. I've always loved birds and I'm learning a bit at a time from all the Birders that I meet. Swan Lake is my second home! .

This site uses Akismet to reduce spam. Learn how your comment data is processed.